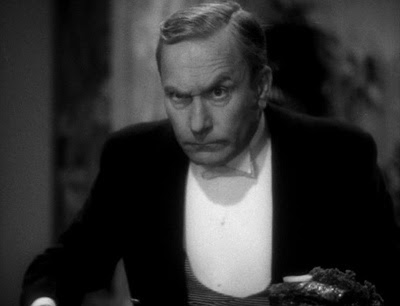 The Lady Eve (1941)
Expectations: Yet another Preston Sturges feature. I’m a fan of his other films, think he writes snappy dialogue, Henry Fonda and Barbara Stanwyck seem like a winning team. What’s not to like?

After viewing: Peter Bogdanavich calls it "the perfect romantic comedy." I don’t know if I liked it as much as some of the other films of Sturges, but I did like it. The whole Stanwyck coning Fonda-then falling in love-breaking up with hime and returning to extract revenge on him and not even disguising herself and he doesn’t recognize her…and...forget the plot…it’s typical Sturges from that era, which is a compliment. And Henry Fonda can do comedy! And Barbara Stanwyck is alluring and…guess I did like it, though maybe not as much as Mr. Bogdanavich.

And the Elisha Cook Jr. supporting player award goes to …William Demarest. He has been in every Sturges film I have seen, as well as many other features from this time period. And of course, he was later Uncle Charlie on My Three Sons. And what did all his characterizations have in common? Grumpiness, grouchiness and cynicism. He’s used most effectively here as Fonda’s assistant who doesn’t trust Stanwyck (and rightly so) throughout the entire picture.
Posted by 1001: A Film Odyssey is produced, directed and written by Chris, a librarian. at 3:24 PM