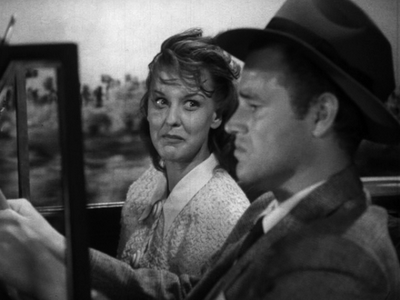 Expectations: I knew Detour was a film noir from one of Martin Scorcese’s favorite directors Edgar Ullman.

After Viewing: Like the main character in this film who takes an unscheduled detour on the way to California to see his girl, I too am living dangerously with this one. I checked out Five Killer Classics DVD from the library (wish also includes 1001 entry The Stranger) and guess what? No bonus features! Whoa, talk about walking on a tightrope, sister. And when I tried to pull up the subtitles option so’s I could catch me all the dialogue-there was none! Even the film itself had a couple of scenes that looked like it was going to crackle and pop right off my televison! Help! Help! Where’s the film restoration department! But honestly, if you’re going to watch a copy of a film that’s on the cheap, watch Detour. Made for what looks like a hundred bucks-but if someone were to ask me what’s a typical film noir film-I’d probably say Detour.

And the Elisha Cook Jr. supporting player award goes to…Screenwriter and original novelist Martin Goldsmith. I said this movie strikes me as typical noir-typical of the genre. Well, a typical noir is going to have lots of voice over narration from the main character. And, brother-does this one have plenty!

Below are some of samples of voice-over narration written by Mr. Goldsmith on what I imagine was pecked out on a 1925 Smith Corona:

That tune! That TUNE! Why was it always that rotten tune-following me around…beating in my head…never letting up? Did you ever want to forget anything? You want to cut away a piece of memory and blot it out? You can’t, you know. No matter how hard you try. You can change the scenery and then you’ll get a whiff of perfume, somebody will say a certain phrase or hum something-then you’re licked…again!

So when this drunk handed me a ten spot I couldn’t get excited. What was it? I said. A piece of paper covered with germs.

Money…you know what that is. It’s the stuff you never have enough of. Little green things with George Washington’s picture that man commits crimes for…slaves for…dies for. It’s the stuff that has caused more trouble than anything we’ve ever invented because there’s too little of it.

Hitchhiking? I know all about how it’s an education. But me? From now on I’ll take my education in college or PS sixty-two where I’ll send a dollar ninety-eight in stamps for ten easy lessons.

Even with a gnawing in the pit of my belly I didn’t want to be in too big a rush to put on the feedbag.

Yes I was in for it…They’d laugh at the truth. And I’d have my head in a noose. What else was there to do but hide the body and get away in the car? I couldn’t leave the car there with him in the gully. That would be like erecting a tombstone.

She was young. Not more than twenty-four. Man, she looked like she had just been thrown off the crummiest freight train in the world. Yet, in spite of this, I got the impression of beauty. Not the beauty of a movie actress mind you or the beauty you dream about when you’re with your wife, but a natural beauty. A beauty that’s almost homely because it’s so real.

If this were fiction, I’d fall in love with her, marry her and make a respectable woman out of her or she’d make some supreme sacrifice for me…and die.

I was suffering from shock. Things were whirling around in my head. I couldn’t make myself think right! All I could think about was the guy playing the saxophone and what he was playing! It wasn’t a love song anymore…It was a DIRGE!
Posted by 1001: A Film Odyssey is produced, directed and written by Chris, a librarian. at 11:35 AM