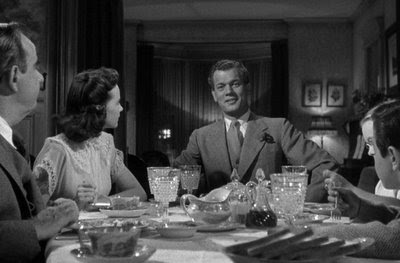 Shadow of a Doubt (1943)
Expectations: The king of directors competition in the 1001 Movies You Must See Before You Die contest is pretty much a slam-dunk in favor of Sir Alfred Hitchcock. There are 18 Hitchcock movies listed. 18! The second place director, Howard Hawks has only 11. (I think I did the math right).
I’m looking forward to watching Shadow of a Doubt as I haven’t seen it and no next to nothing about it.

After viewing: The plot really unravels slowly, but I didn’t mind that. The story gets where its going at its own speed and the slow arc heightens the drama. A good cast (led by Joseph Cotton and Teresa Wright), a good story and a pretty decent director too.

And the Elisha Cook Jr. supporting player award goes to…Screenwriter Thornton Wilder. Certainly a big name Hitchcock got to pen the majority of this screenplay, which is well done. But who knows how much is Wilder and how much are the script doctors (including Mrs. Hitchcock). Other memorable supporting players in this film include Henry (Clarence, Angel second class) Travers, Hume (he was actually young once) Cronyn, Patricia (the sweet mother who is slow to catch on) Collinge and daughter Edna May (the smart daughter, whose character has read Ivanhoe, which makes her a better man than I am, Gunga Din) Wonacutt and Wallace (Wasn’t he the one who was going to buy Schlitze the Pinhead a hat with a feather coming out of it in Freaks?) Ford.
Posted by 1001: A Film Odyssey is produced, directed and written by Chris, a librarian. at 3:35 PM