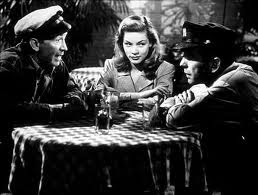 Expectations: I know I've had several viewings of the scene where Lauren Bacall says “You know how to whistle don’t you, Steve? You just put your lips together and blow.”

After Viewing: I honestly thought I had seen this one before, but it quickly became evident that I had not. I guess I had just seen clips of the “you know how to whistle” scene enough times to make me think I had. The movie has a lot going for it including Lauren Bacall’s screen debut, William Faulkner's screenplay, Ernest Hemingway's original story and ace director Howard Hawks. Overall, the movie feels a little like warmed over Casablanca to me: exotic locations, Bacall taking Ingrid’s Bergman’s romantic love interest role, quirky supporting characters, the neutral Humphrey Bogart eventually falling down on the right side of the fight, there’s even a piano player,-Hoagy Carmichael, who performs the memorable song “Hong Kong Blues,” Not that those similarities are necessarily a bad thing.

But the main draw here is Humphrey Bogart. Woody Allen could have easily gotten his inspiration for Play It Again, Sam from this movie. Who wouldn’t want to emulate someone that cool and unflappable? I just wish I could call a woman that gets out of line a “screwy dame” without sounding silly.

And no, I will not discuss the “naked pictures of Walter Brennan” scene from Good Morning, Vietnam.
Posted by 1001: A Film Odyssey is produced, directed and written by Chris, a librarian. at 4:04 PM