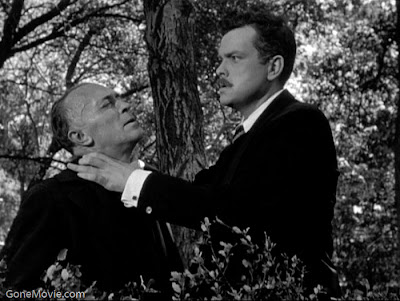 Expectations: Another in the it’s been years since I’ve seen it category. Orson Welles stars and directs. Curious to see how it stands up.

And the Elisha Cook Jr. supporting player award goes to…Billy House as the middle aged, balding, paunchy proprietor/pharmacist of the local general store whose biggest thrill is finding someone to play checkers with him for a quarter a game and snooping into other people’s business. I honestly thought I had seen Mr. House in other movies, but as I looked at his IMDB resume, it seems I was mistaken. But he brings some well-needed humor to a film with grim subject matter.
Posted by 1001: A Film Odyssey is produced, directed and written by Chris, a librarian. at 11:34 AM