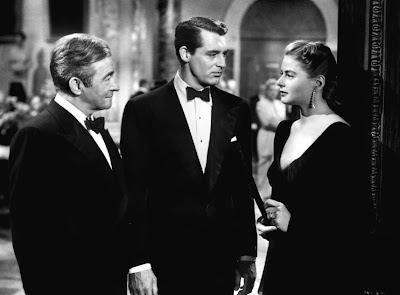 Notorious (1946)
Expectations: It’s been many a summer since I’ve seen this one. Mostly remember the scenes from Claude Rains’s wine cellar.

After Viewing: I was actually surprised that this movie seemed to get off to a slow start. It seemed to drag in the establishment of the Ingrid Bergman-Cary Grant relationship. But when the movie goes to Rio and Bergman and Grant get their assignment to get the goods on Nazi sympathizer Claude Rains, the movie takes off and certainly earns its rank in the Hitchcock pantheon. And the final scene is as good as any of them.

And the Elisha Cook Jr. supporting player award goes to…Claude Rains, of course. I’m used to Rains playing a bad guy that you can’t help but liking just a little, as in The Adventures of Robin Hood, even though he wants to kill the main character. Or as a bad guy, whose really not so bad at all, as in Casablanca. He usually seems to do this with charm and almost winking at the audience. Not so in Notorious. Dignified: Yes. Winking at the audience: No. He is as terrified meeting the disapproval of his Nazi colleagues and his domeineering mother and he elicits our sympathy to him from go. And who could blame him for falling head over heals for Ingrid Bergman? Even Cary Grant concedes how easy falling in love with her is. So this role is slightly different for Mr. Rains, but he pulls it off well.
Posted by 1001: A Film Odyssey is produced, directed and written by Chris, a librarian. at 11:19 AM