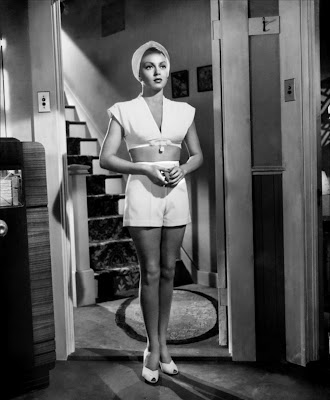 The Postman Always Rings Twice (1946)
Expectations: I’ve never seen it. I have seen the Nicholson remake which I thought wasn’t all that memorable, but haven’t seen that one in years.

After Viewing: This film is based on the James M. Cain story is about a drifter played by John Garfield who falls for a restaurant owner’s young wife, played by Lana Turner. They fall in love and plot to do away with him. Interesting film noir. Liked it, but not as much as Double Indemnity. Though I definitely get more “heat” from Garfield and Turner than we get from Double Indemnity’s Barbara Stanwyck and Fred MacMurray. I’d be remiss if I didn’t mention Lana Turner’s legs, since they are showed off to such effect in this film. Let's just say they're impressive...bordering on spectacular.

And the Elisha Cook Jr. supporting player award goes to… Cecil Kellaway, who has a pretty plum part as the colorful but doomed husband of Lana Turner. It’s certainly a better part than Tom Powers gets in the doomed husband role in Double Indemnity. There’s also a good role here for Hume Cronyn as a shady, but smart attorney. And who is that as Cronyn’s assistant? It’s none other than Alan “Fred Flintstone” Reed!