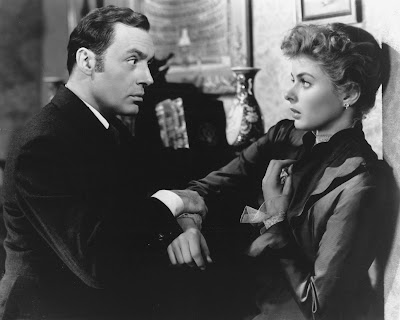 Gaslight (1944)
Expectations: This is a movie I’ve heard about since I was a kid, but have never seen. I know that Charles Boyer tries to drive his wife Ingrid Bergman insane. To what end? I don’t know. I guess I’ll have to watch.

After viewing: A good psychological thriller. And why do movie trailers (Like the one for this film) show scenes from the last parts of the movie? If you show me how it ends, I’m much less likely to want to see it. This was true of trailers in the 40’s and true of movies today. I’m just wondering.

I can see why they gave the Oscar to Ingrid Bergman. She loses her marbles with great aplomb.

And “to gaslight” someone-I imagine comes from the play and subsequent movie (technically movies since there is a British version of Gaslight as well). But does anyone use the term any more? It never really comes up that much for me.

And the Elisha Cook Jr. supporting player award goes to...Angela Lansbury. Who’d have thought Angela Lansbury was ever a teenager, let alone a teenager with an attitude?
Posted by 1001: A Film Odyssey is produced, directed and written by Chris, a librarian. at 3:32 PM