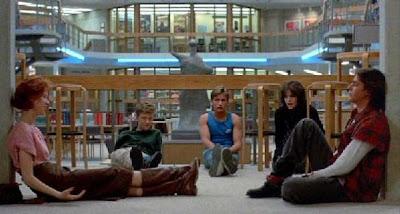 Why haven’t I seen this before? Because I was just never excited about seeing films with members of the brat pack. No, a movie with Molly Ringwald and Judd Nelson would have never been on my must see list.

After viewing: How you relate to certain movies depends on where you were in your life when it came out. I was probably about the same age as most of the people in this movie when it came out, though they were playing high school students. So I’m 21 or 22 years old and I’m suppose to relate to these constantly whining teengaers? I’m supposed to relate to a movie with Judd Nelson in it?

But you know, it’s not all that bad and does have some occasional insight.

I do give the movie points for being set in a library as well, though I did have to close my eyes during the scenes where Judd Nelson began defacing library property.

I did see a lot nostalgic sadness when director John Hughes passed away a couple of years ago, so I do understand that many related to and grew up with his films. If only it would have come out in 1979, I might like this one as much as Rock n Roll N'High School. Of course, P. J. Soles wasn't in The Breakfast Club either.
Posted by 1001: A Film Odyssey is produced, directed and written by Chris, a librarian. at 11:29 AM