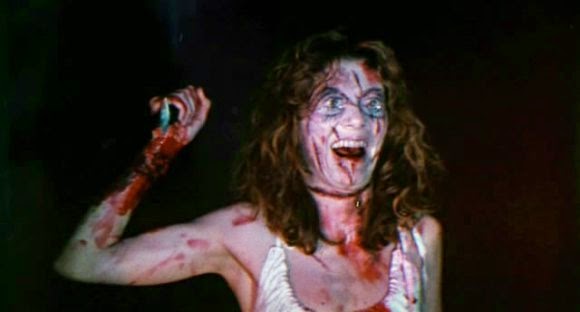 Best screaming: The one's from the young lady during the opening scene who had just ran away from the academy only to be attacked at a friend's house. The screams from Suzy's friend Sarah when she falls on the razor wire are pretty good, too.

Scariest part: When Suzy's friend Sarah (above) gets trapped on some razor wire before she is to be killed. Of course, this may have something to do with my phobia about being trapped on razor wire.

Least favorite part: What is going on in this movie? One may rightly ask this question at about the halfway point. No worries. Suspiria supplies this information to the main character in the guise of a rather conveniently placed psychiatrist and professor, who know all about the history of the academy and tell it all to Suzy. Good to know these things, but wish they could have been conveyed to the audience in a less obvious manner.

Favorite part: When things start percolating in the academy at the end and we see all the evil come to the surface, it's a nice payoff for an at times confusing plotline. But maybe we should be confused and unsure to relate more to the heroine's plight, eh?

Additional casting notes: I had always liked Jessica Harper (above) in several films from the 70's and 80's such as Inserts, Stardust Memories, Love and Death, Pennies From Heaven and My Favorite Year. I had no idea that a cult Italian horror film may be her best known role!

And in addition, it's interesting to see Joan Bennett playing a similar matronly role in this film that she played for years on my favorite cult soap opera Dark Shadows during the 60's.