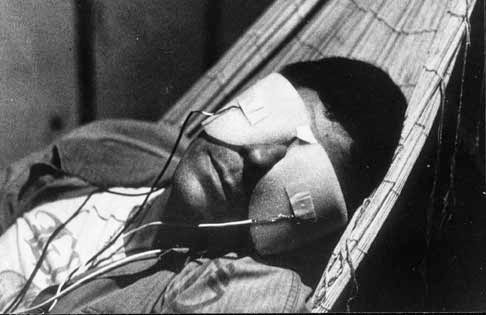 The 1001 movie book has never listed Terry Gilliam's film, Twelve Monkeys in any of its editions. This cerebral time-traveling sci-fi is one of my favorite films of the genre and I would definitely included it in my book.

What I didn't realize until recently was that Twelve Monkeys was based on the French film, La Jetee (The Pier) which is a twenty-eight minute French film whose story is told almost entirely through still pictures and narration.

I'm not sure I would have even made the connection between the two films if I hadn't know it going in. La Jetee does tell its story well, though I'm not sure this form of storytelling could have survived a full length movie. The plot involves a man who sees a death at the beginning of World War III and later becomes a guinea pig in some time travel experiments to try to somehow use the information of the future and past to try to fix the problems of the present.

One problem I have is that they tend to gloss over the time travel element. I guess the viewer should just take this as a given and get on with the plot. I admit I like time travel stories, but the viewer or reader often has to overlook the sometimes spurious nature of the science involved. I guess not everything can be as convincing a time travel device as a DeLorean speeded up to 88 miles per hour.

By the way, La Jetee is in the 1001 movie book. Let's try to find room for Twelve Monkeys in the next one, eh?
Posted by 1001: A Film Odyssey is produced, directed and written by Chris, a librarian. at 5:24 AM