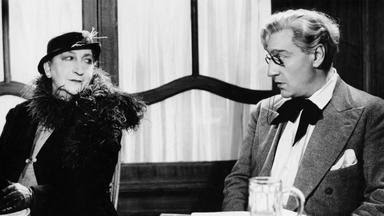 The Story of a Cheat is a French comedy that didn't have a lot of laugh out loud scenes for me, but did have a lot of scenes that made me say "Ah, that was clever," to myself. The story centers around the life of a man who appears to try to lead an honest life, but through unfortunate circumstances often falls into being a con man or a thief. The film has a lot of dark humor that had to be ahead of its time, including the protagonist's family of twelve all dying of poison in such a lighthearted way.

One interesting element of the film is that it is told almost entirely in voice-over narration. I usually complain about people that say that they don't like foreign films because they have trouble keeping up with the subtitles, but in this case, I will admit it was a little hard at times to keep track of the French narration at times since it seems at times that it's all narration! That being said, I found the narrative device to be pretty effective and my parting assessment of this film is "Ah, it is clever."
Posted by 1001: A Film Odyssey is produced, directed and written by Chris, a librarian. at 5:04 AM