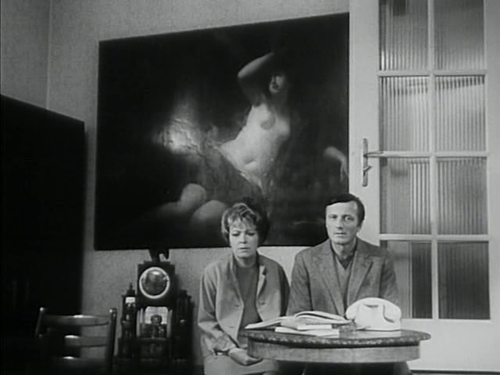 The Ear is here!

The Ear is listening!

The Ear is coming for you!

The Ear is a movie that I knew nothing about going in and for the record  is not a horror movie like Oliver Stone's The Hand.

What The Ear depicts is a different type of horror. This involves the constant fear of surveillance by the ruling class, which in this case is the Soviet Union which explains why this movie went unseen for two decades after it was made.

A majority of the film involves a bickering couple who argue about their personal lives as well as feeling the pressure of the man's political life being under scrutiny. The rest of the film is mostly a series of flashbacks from that night's dinner party which involves various officials and their dealings with the couple. I thought this plot device worked very well and brought into focus what the couple was experiencing in different lights.

So, I'd recommend giving this one a listen.
Posted by 1001: A Film Odyssey is produced, directed and written by Chris, a librarian. at 10:36 PM