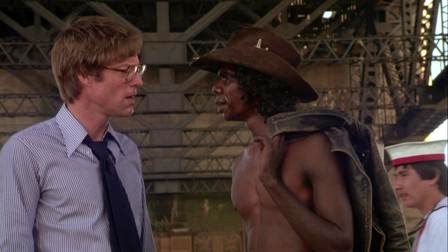 Definitely one of those cult movies I've heard about for since the late 70's but never got around to seeing. But what was it about again? Australia, Peter Weir, Richard Chamberlain...that's about all I knew about it.

After (finally) seeing it, it turns out this was about an American lawyer (Chamberlain) living in Australia that gets involved with a case involving four Aboriginal men accused of killing a man. This isn't any ordinary case. The lawyer continues to have strange dreams, mostly involving one of his clients (David Gulpilil, who also appeared in the Australian classic Walkabout). The film also involves apocalyptic weather, aboriginal tribal history and cultural clashes.

It was a movie that took me into its metaphysical plotline at times, but not nearly as far as I wanted to go with it. In other words, it's a movie I liked, but really wanted to love.
Posted by 1001: A Film Odyssey is produced, directed and written by Chris, a librarian. at 6:27 AM