But I'm giving the award to Eric Blore, who plays Sullivan's butler. This role was nothing different for Blore, who Hollywood loved to cast a butler, so he clearly has the buttlin' thing down. He's resourceful, loyal to Sullivan and probably wiser than his boss in a lot of ways. Other films I've seen him in include the Astaire/Rogers classics Swing Time and Top Hat and Laurel and Hardy's Swiss Miss. 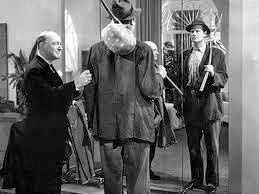 Posted by 1001: A Film Odyssey is produced, directed and written by Chris, a librarian. at 1:48 AM