If you are talking about Jimmy Cagney movies, the first one that may come to mind might be his star making vehicle The Public Enemy. Or you may think of his Academy Award winning role in Yankee Doodle Dandy. A personal favorite of mine is Billy Wilder's One, Two, Three. All that aside, I don't think there is any movie that typifies the Cagney screen persona than White Heat.

Cagney was a movie veteran in 1949 and had done a lot of gangster pictures up to that point. But I'm not sure he ever played anyone as evil and crazy as Cody Jarrett. He's got a mother obsession, a history of mental illness running through his family that has clearly come down to him, dramatically ill-timed side-splitting headaches, a beautiful but unfaithful wife who he still has an unfortunate passion for and has to constantly cope with people that betray him.

And have would-be Cagney impressionists ever have a better line to use than, "A copper! A copper! How do you like that boys? And we went for it. I went for it. Treated him like a kid brother. going to split 50-50 with a copper!" Or if you don't like that one, you can always just scream, "Made it Ma! Top of the World!"

And the Elisha Cook Jr. supporting player award goes to…Fred Clark. I could give this to reliable second tier leading man Edmond O'Brien or Virginia Mayo as the Cagney's lovely but devious wife. But I'm going for character actor specialist Fred Clark, who really is playing against type here as Cagney's criminal connection. I just finished watching another Clark role (and a funnier one) as a movie producer in Sunset Boulevard. I've also seen Fred in plenty of other films (sometimes with toupee, sometimes without), but I honestly seem to remember him most from his TV roles, including the doctor on The Beverly Hillbillies and as the neighbor in The Burns and Allen Show. 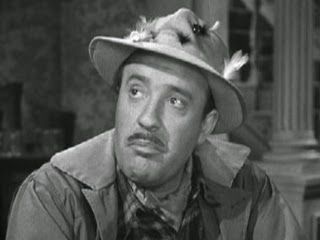 Posted by 1001: A Film Odyssey is produced, directed and written by Chris, a librarian. at 2:01 AM