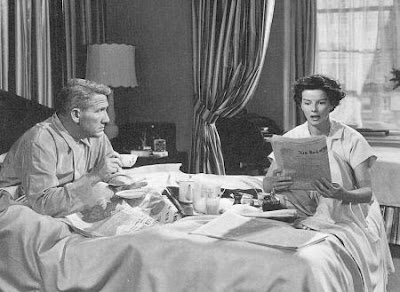 Adam’s Rib (1949)
Expectations: I remember in the 70’s, one of the networks had a prime time program called simply The Movies, which showed clips from films from Hollywood's past. I actually tried to write most of the ones down I remembered at the time. I'd like to read the list, but it's really turned the pages have pretty much turned to brown at this point. Anyway, Adam’s Rib was featured on one of the clips. So it’s taken me thirty-six years or so to get around to watching the whole thing. Adam’s Rib was also a short-lived TV series from the early 70’s with Blythe Danner and Ken Howard which I have a vague recognition of.

After Viewing: The plot of Adam’s Rib involves Spencer Tracy and Katherine Hepburn as lawyers on the opposite end of a trial involving a woman accused of attempting to kill her husband. That’s really all you need to know. This movie relies mostly on the chemistry of the two stars (which is considerable) and the sharp script by Garson Kanin and Ruth Gordon.

And the Elisha Cook Jr. supporting player award goes to…David Wayne as the witty, gay rival of Tracy for the affections of Ms. Hepburn (And yes, Wayne proves definitively that you can be gay and in love with Katherine Hepburn.) And honorable mention goes to Judy Holliday for her wonderful Melanie Griffith impersonation.

Great Librarian moment: There’s no great librarian moment in Adam’s Rib, but I’d like to mention another Tracy/Hepburn movie, Desk Set from 1957, which is one long great librarian moment. The plot involves an efficiency expert played by Tracy who is looking at the possibility of using or replacing the gallant librarians (led by Katherine Hepburn) working for the conglomerate Federal Broadcasting Company with a computer. The scene where the IBM computer is unable to properly decipher a sophisticated question and the librarians quickly save the day by using books for the answers is really exciting! Honestly! Well, maybe you have to be a librarian.

I’d also like to hand out a bonus Elisha Cook Jr. supporting player to…the lovely Sue Randall of Desk Set. Playing a librarian no less! If you don’t recognize the name, she played elementary school teacher Miss Landers on Leave It To Beaver. I believe this is the first time I’ve seen her in anything else. As as long as we're talking about black and white era teacher crushes, let's throw a rose to June Marlowe who played Miss Crabtree in the Our Gang comedies. Good ole Miss Crabtree...Good ole Miss Landers...
Posted by 1001: A Film Odyssey is produced, directed and written by Chris, a librarian. at 4:08 PM