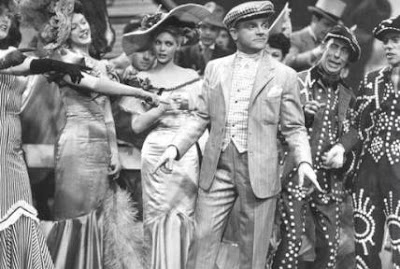 Expectations: I haven’t seen Yankee Doodle Dandy in sometime. My fear is that it will probably come off as a little dated.

After Viewing: Well they certainly don’t make um like this anymore. A very sanitized version of the life of song and dance legend George M. Cohan features his rise and, well his rise and retirement and ends with his triumphant return to Broadway. Much of this biography is told through the music. The section from Cohan’s Broadway production of Little Johnny Jones seems to run about twenty minutes.

This movie was also so well timed. It came out right after the U. S. entry into World War II and fans embraced the patriotic fervor of this film. Also, after many years of effort, Cohan finally got a biography on screen that met with his approval. The film was released only a few months before his death in 1942.
And of course, James Cagney as Cohan seems like such a natural choice now, though it is really in contrast to so many of his tough guy roles.

I don’t mean to say I didn’t like Yankee Doodle Dandy. I actually did. I was just struck at times by the lack of conflict in the story. Still recommended, but for enhanced enjoyment, try to view on the Fourth of July or Memorial Day.

And the Elisha Cook Jr. Supporting Player Award goes to...Walter Huston. I also really liked Huston in Dodsworth and Treasure of the Sierra Madre. I don’t think the acting part of the role here is as demanding as those other films, but he proves himself to be quite a good song and dance man playing Cohan’s father. I’d also like to give an honorable mention to Joan Leslie as George M’s Yankee Doodle Sweetheart because she’s just so damn adorable.