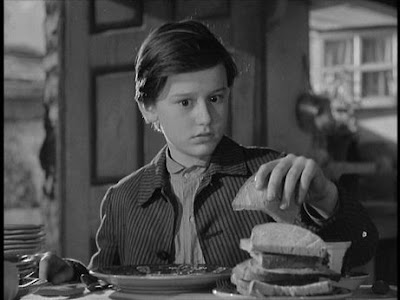 Expectations: This was the John Ford film that beat out Citizen Kane and Sullivan’s Travels for best picture at the 1941/1942 Academy Awards. Haven't seen it.

After Viewing: And it is a good film. A sweeping story of 19th century Welsh coalminers. I can see why the Academy picked it over the brilliant but more controversial Kane. Of course, How Green Was My Valley was a little controversial with its pro-Union message.

On the accompanying DVD commentary track by film historian Joseph MacBride, he can’t seem to understand why the unattached minister Walter Pidgeon turns down the advances of the beautiful Maureen O’ Hara. Well, let me explain…Maybe it’s because he puts her on so high a pedestal that he is so afraid of disappointing her. Maybe it's because he feels that his devotion to the community is more important. Maybe he thinks it would interfere with his higher calling to the church, maybe he…Ok, I don’t understand it either.

Note to self: Since this is the second film in a row I’ve watched where a young character has read Ivanhoe, (Shadow of a Doubt’s precocious Ann being the other) I must put Ivanhoe on the top of my reading list immediately! Malcolm Gladwell's latest book will just have to wait!

And the Elisha Cook Jr. supporting player award goes to…Master Roddy McDowall (that’s how he’s billed). Now why wouldn’t I give this to Donald Crisp as the Morgan family patriarch? He did win a supporting Academy Award for this after all. I agree that his performance is memorable. It is also a lead role in my book.* You can almost make the same argument for Master Roddy. In fact, this is one of the few films from this era that I really couldn’t pick out who the star of the film is. I know Walter Pidgeon and Maureen O’ Hara are top billed, but they too are really supporting players in my book. **