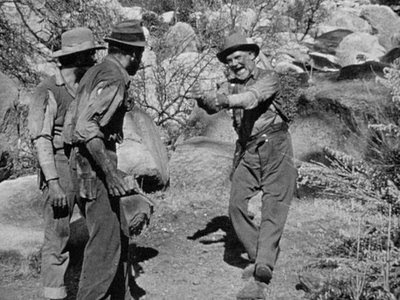 Expectations: It’s been so long since I’ve seen this. I remember liking it and who among us hasn’t at one time another repeated the line, “I don’t have to show you any stinking badges.”

After Viewing: I try not to state on this blog that a movie is great. I may say how much I liked a movie. You can’t argue with that. But who am I to determine the aesthetic merits of a particular work of art or film? That being said, I’m willing to go out on a limb on this one.

And the Elisha Cook Jr. supporting player award goes to…Alfonso Bedoya. I realize I should give this to Walter Huston. He deservedly won an Academy Award for the part of the old prospector. The memorable scene where he dances a jig may only be topped by his hysterical laugh near the end of the film. Yes, Walter Huston was great. But let’s give some love to Alfonso Bedoya as the Mexican bandit Gold Hat and remember to repeat Senor Bedoya’s line at every opportunity, “Badges? We ain’t got no badges. We don’t need no badges. I DON’T HAVE TO SHOW YOU NO STINKIN' BADGES!" You’ll be glad you did.
Posted by 1001: A Film Odyssey is produced, directed and written by Chris, a librarian. at 4:07 PM