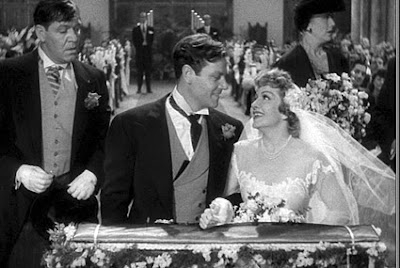 Palm Beach Story (1942):
Expectations: I knew it featured the director-star team (Preston Sturges, Joel McCrea) of one of my favorite movies from the 1940’s, Sullivan’s Travels.

After viewing: I watched this movie after watching about ten Ingmar Bergman movies in a row. (If you aren’t familiar with Bergman, he doesn’t specialize in screwball comedies). The contrast made it seem like the dialogue in Palm Speech Story was speeded up like a 33 1/3 album turned up to 45*.. Anyway, the script was very funny, but as I said, it was so quickly paced, I found myself backing up the tape to get some of the dialogue I missed the first time through. My favorite line goes something like, “Nothing is forever…except for Roosevelt**.” Also look fast for clever sequence going on behind the opening credits.

*Yes, I do realize vinyl references may appear dated.
**Line only funny pre-1945.

And the Elisha Cook Jr. supporting player award goes to …Frank Faylen. Seems strange to award someone with just one scene in a movie that has such impressive second bananas as Mary Astor, Rudy Vallee, William Demarest, and Franklin Pangborn in it. But when I saw Frank driving that cab halfway through the movie it foreshadowed the cab he would drive four years later in It’s a Wonderful Life and who doesn’t love It’s a Wonderful Life?
Posted by 1001: A Film Odyssey is produced, directed and written by Chris, a librarian. at 1:16 PM