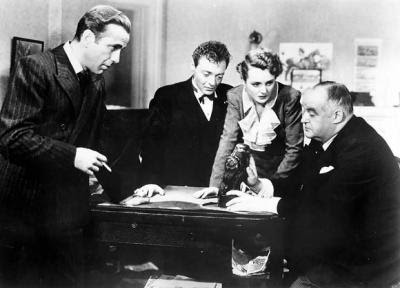 Expectations: This one’s easy. This will be about the fourth time I’ve seen this John Huston/Humphrey Bogart/Dashiell Hammett film and like it better each time.

After Viewing: Even though the appeal of Dasheill Hammett’s story is figuring out what the crooks are up to, this film is so much fun to watch, you really don’t mind having been through this movie before.

And the Elisha Cook Jr. supporting player award goes to…Syndney Greenstreet. I feel a little bad about not giving this award to Elisha Cook Jr., since I’ve named this award after him. And I do give credit for the fortyish Mr. Cook playing a twenty-year old gunsel. But this film is top heavy with great supporting players. Barton Maclane or Ward Bond-good, but not good enough for the award here. How about the stunning ten second cameo from director John Huston’s dad Walter? Impressive but not good enough. Mary Astor as the femme fatale? I like her character more with each viewing, but not good enough. Okay, Peter Lorre as the effeminate crook Joel Cairo, perhaps? In almost any other film it would be Lorre. But I’ve got to go with Greenstreet as Casper “The Fat Man” Gutman. Rephrensible, but somewhat charming in his own way-and a perfect counterpoint to Bogart.
Posted by 1001: A Film Odyssey is produced, directed and written by Chris, a librarian. at 4:03 PM