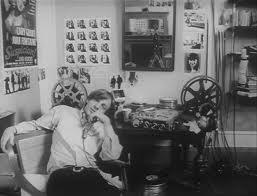 David Holzman made a documentary about his life in 1967. Just what is happening everyday in his life. He is obsessed by films and filmmaking as you can tell by the cameras, reels, projectors and movie posters around his apartment. He is also not afraid to tell us what he is feeling even though what he is often feeling involves how he will be feeling as the camera is rolling.

He wants to get insight from his girlfriend, Penny. Penny thinks David is obsessive with his camera and his wanting to film and record anything and everything. When David films her while she is sleeping in the nude, it appears that is the last straw. David loses Penny. He also films a friend who basically thinks David is wasting his time and just from the fact that he is filming someone, the very nature of that leads to the loss of any authenticity. David interviews a woman who may or may not be a drag-queen who likes to talk about very little but sex. David likes to take pictures of the streets and people of New York. He likes to take pictures of his neighbor and tries to determine what her life is about and tries hard to study the routine of her life for meaning. David also takes film of himself from different angles. Is shooting yourself from a different angle going to show you something different about yourself that you wouldn't have otherwise ascertained?

Do we attempting any artistic endeavor or any other type of endeavor for that matter really try to learn something or figure something out? Like David over forty years ago, I too, have been pondering this question. I haven't come up with a satisfying answer yet.

Posted by 1001: A Film Odyssey is produced, directed and written by Chris, a librarian. at 4:24 AM