THE YOUNG GIRLS OF ROCHEFORT (1967,FRANCE) 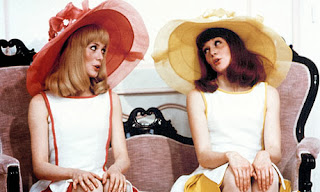 I really didn't know much about The Young Girls of Rochefort, but its time on Netflix was running out and it was on the 1001 list, so I decided to give it a go. I quickly learned that it was from the director (Jacques Demy) of Umbrellas of Chernbourg, the movie where all the dialogue is sung. Rochefort also has much of the dialogue sung and plenty of characters dancing as well. I suppose you could call it a musical, but the feel is a bit different. I didn't like it as well as Umbrellas, but I admit it did win me over, especially when Gene Kelly comes on the scene and begins dancing and speaking French. The plot involves lost loves, unfulfilled dreams and a rather strange subplot about a serial murderer. Other than the serial murderer, it is a bright, vibrant experience. And it does have Catherine Deneuve. Happy, happy, joy, joy!

The next post will be about a less happy film topic. 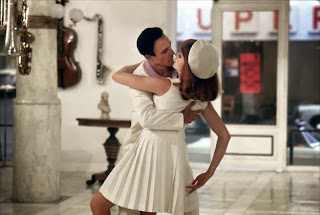 Posted by 1001: A Film Odyssey is produced, directed and written by Chris, a librarian. at 1:31 PM