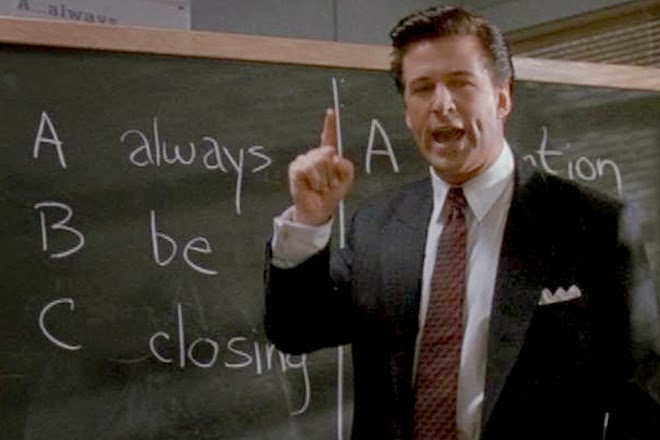 The film version of  the David Mamet's critically acclaimed stage play about the daily struggles of an office of Chicago real-estate salesman I found to be pretty powerful at times. The film benefits from a strong ensemble cast that includes: Al Pacino, Jack Lemmon, Alan Arkin, Kevin Spacey and Ed Harris. Alec Baldwin really connects in his one scene as a ruthless company "motivator."

My favorite quote from the movie is Ricky Roma (Al Pacino) cursing out his office manager (Kevin Spacey) after a lost sale.

WHAT YOU'RE HIRED FOR, is to help us... does that seem clear to you? TO HELP US, not to... FUCK-US-UP... to help those who are going out there to try to earn a living... You fairy! You company man!!

Posted by 1001: A Film Odyssey is produced, directed and written by Chris, a librarian. at 4:21 AM