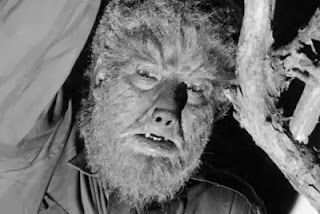 I might be the only person whose first movie to be cued with their brand new Netflix subscription is...the 1941 version of The Wolfman with Lon Chaney, Jr. I just hadn't had a DVD of it available and I haven't found it available on YouTube before, so I decided to give it a go.
I grew up watching the Universal monsters on TV. Frankenstein, Dracula, The Mummy etc. The scariest one of all had to be the Wolfman, because the wolf  moved at you quickly like a force of nature and there was really no getting away. You could always run away from the Frankenstein monster, but there was no escape from The Wolfman.
The Wolfman as a film is dated as far as some of the action goes and the transformation scene is only adequate. However, once Larry Talbot changes into The Wolfman, I do love the way he looks. So A for makeup, B- for transformation.
The exposition scenes with the gypsys and Bela Lugosi actually playing a gypsy named Bela is actually pretty good, though a bit on the abbreviated side. Of course, everything is abbreviated in this movie at only 69 minutes in length total. We also have appearances by supporting actor masters Claude Rains and Ralph Bellamy.
The mood of this film which is exemplified by the Talbot ancestral home and all that darn fog is pretty effective. A for atmosphere.
The Wolfman also gave Lon Chaney Jr. his defining career role. Interesting that he did play Frankenstein and Dracula in later films, but The Wolfman was the one role that was really his. He isn't revered by film buffs like his father, but let's certainly give him his due as Larry Talbot/Wolfman. Of course, he does seem to have a little problem in the scenes where  clunky Larry Talbot is trying to hit on the lovely Evelyn Keyes. But no matter, you need to see The Wolfman. But if you are going to include The Wolfman on the 1001 list, I'd think about adding The Creature From the Black Lagoon to the list too. 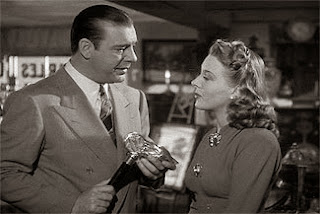 Posted by 1001: A Film Odyssey is produced, directed and written by Chris, a librarian. at 4:20 AM