Of all the James Bond movies made during its fifty year history, the one that has made every edition of the 1001 Movies You Must See Before You Die book is Goldfinger. Hard to argue the choice. It is probably the most famous Bond film and may have the most famous Bond villain and theme song. It has great gadgets including the debut of the sexiest Bond woman since Ursula Andress, I'm talking about Bond's Aston Martin with all its accesories including the passenger ejector seat. (I wonder if Bond will use that ejector seat at some point in the movie...Hmmm.) Goldfinger also has Pussy Galore! and of course, the original Bond, Sean Connery.

What's interesting about watching Bond over the years is with each new Bond film, you want to see what's new, but it's more important to see what's old. By this I mean that we expect certain things to happen in a James Bond movie and we're disappointed when it doesn't. Like having a different actor play CIA guy Felix Leiter in every Bond movie. Maybe that's not the best example, but I'll try some others for Goldfinger below.

Bond is going to have a big action scene before the opening credits.  JB blows up a drug warehouse in Latin America in the first scene of the movie.

Those hard to resist opening credits and song. As the credits roll, we are going to hear the latest Bond theme song with silhouetted women and guns and knives and 007  in the background. The opening images are covered in gold in Goldfinger.The title song by John Barry and sung by Shirley Bassey may be the most famous James Bond theme of them all.

Bond is going to his boss M who gives out his assignment. "Your adversary is not to be taken lightly, 007."

He meets up with Q, who shows off his assorted gadgets that Bond will use later in the film. Q usually seems irritated with Bond for not taking his gadgets seriously enough.

Bond will tussle with a villain or two before disposing of him and making a pun. "Shocking!" Bond quips after a foe. is electrocuted

Bond will sleep with a woman early on that has some relation with the mastervillain and she will not survive for very long. Jill Masterson's golden death is a great example.

We meet the mastervillain who is always in love with the sound of his own voice instead of killing Bond when he has the chance.  As Auric Goldfinger would say, "No, Mr. Bond. I expect you to die...But let me go into great detail about my plan first."

We will often meet a sidekick of the villain who Bond will have to do battle with. The metal hat throwing Asian strongman Oddjob from Goldfinger. A later film example is Jaws of The Spy Who Loved Me.

Bond will engage in high speed chases on several different continents. Bond is chased by Goldfinger's men in Switzerland.

There is a big finale in which Bond will ultimately thwart the villain's nefarious plan. Goldfinger didn't really think he could get away with breaking into Fort Knox, did he?

Bond will go off into the sunset with a beautiful woman. Whether they be named Pussy Galore, Honey Rider or Octopussy

Oh, and hopefully Bond's Aston Martin  (BMT 216A) will come into play. And yes he does use the ejector seat on an unwanted passenger!

In the updated 1001 Movie Book, a new Bond movie is listed, The most recent release, Skyfall. I've slacked off on my Bond viewing in recent years (though I've seen all almost all of them over the years) but thought it would be as good a time as any to watch the latest Bond Adventure. I wasn't blown away with Casino Royale (the newer one, not the old Woody Allen one) and I haven't even seen Quantum of Solace, but let's see how Skyfall meets our Bond criteria.

Bond is going to have a big action scene before the opening credits.  Skyfall has a most exciting action scene involving Bond chasing a mercenary through the streets of Istanbul culminating with a battle on top of a train ending with Bond getting shot and falling into a hundred feet to his death...Now, you know he isn't really dead, don't you?


Those hard to resist opening credits and song. The title song sung by Adele is very nice and Bondonian. The opening credits are clever images of graphics, dragons, ladies, guns and knives with James Bond in the middle of it. We've frankly progressed a long way from  silhouetted models

Bond is going to his boss M who gives out his assignment. M has been Judi Dench for the last twenty years or so, but I still admit I think of M as being Bernard Lee. But I will say that by the end of my viewing of Skyfall, I now think of Judy Dench as being M.

M's office assistant Moneypenny is going to flirt with JB  Not exactly, but the charcter of Moneypenny does come into play.

He meets up with Q, who shows off his assorted gadgets that he will show off later in the film. This was an interesting twist in Skyfall. Q is no longer the seemingly always aged Desmond Llewleyn. He is now a computer geek, who looks like a 19-year-old version of Bill Gates who thinks that he could do more from his computer over espresso than Bond can do in the field in months.

Bond will tussle with a villain or two before disposing of him and making a pun.  You didn't really think the mercenary who tried to kill Bond at the beginning of the film would last too long, did you? The puns seem to be at a minimum here. I did really like the later scene when Bond has to dynamite his childhood home and matter of factly states that "I always hated this place."

Bond will sleep with a woman early on that has some relation with the mastervillain and she will not survive for very long. Just don't get too attached to the character of Severin. That's all I'm saying.

We meet the mastervillain who is always in love with the sound of his own voice instead of killing Bond when he has the chance. I liked Javier Bardem's villainous Silva, an-ex agent turned evil, who seems too...love to talk and talk about what he is going to do to Bond and to her majesty and England and everyone else.

We will often meet a sidekick of the villain who Bond will have to do battle with. Doesn't apply as much here. In later films (later films=post-Timothy Dalton era), it seems lots and lots of the supervillains henchman have to go down to satisfy the action quota.

There is a big finale in which Bond will ultimately thwart the villain's nefarious plan. (Blowing up Buckingham Palace, the House of Commons and I think Downton  Abby, I think was what Silva was planning to do. That's not quite right, but its something along those lines. And you know he will not ultimately succeed!

Bond will go off into the sunset with a beautiful woman. Not this time. M's maternal relationship with Bond is explored at the end of Skyfall, bringing the M character full circle.

Oh, and hopefully Bond's Aston Martin  (BMT 216A) will come into play.  When Bond breaks the Aston Martin out of mothballs here, it's like the return of an old friend for the audience. M even jokes about not wanting Bond to use the Aston ejector seat on her.

It all comes home at the end when Bond has to return to his childhood home of Skyfall. There are really some great scenes of poignancy here that are unusual for a James Bond movie.

James Bond has been on film for 50 years and Skyfall was a great trip for newer fans and a nostalgic journey for older fans. Bond is getting old and feeling it, but he gets to prove that he's still got it. And Daniel Craig is Bond now...at least for the time being.. 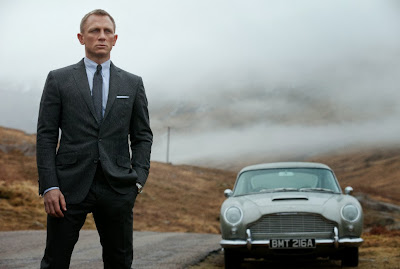 How British Is It?: It's James Bond! How can you get more British than James Bond?

Posted by 1001: A Film Odyssey is produced, directed and written by Chris, a librarian. at 5:57 AM