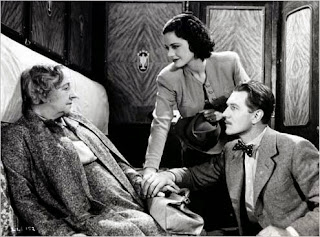 One of the last of Hitchock's British films is noteworthy for its very snappy dialogue, intriguing plot and very likable lead actors (Michael Redgrave, Margaret Lockwood and Dame May Whitty). The action scenes near the end don't seem to hold up too well, but it's still a fun film to watch.

But how British is it?Quite British indeed! Especially seen in the supporting characters of Charters and Caldicott and their somewhat excessive love of the very British game of cricket.

Rating for Britishness from 1-10: About an 8. However, the section on Bandrika gets a 10 for its "Bandrikaness."
Posted by 1001: A Film Odyssey is produced, directed and written by Chris, a librarian. at 6:02 AM