How British is it? month (Post 8 of 10)
The Lavender Hill Mob and The Ladykillers 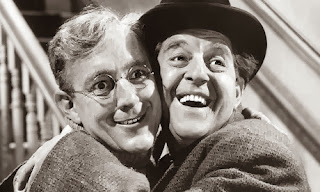 The Lavender Hill Mob
It's a funny thing about going through the films on this list. I like to watch a few things that have a certain theme and move on to the next thing. But how do I choose what to look at next? Well, sometimes these films just drop in your lap. I was in a Pawnshop and saw as part of a Hitchcock DVD collection that included Blackmail, Sabotage, and The 39 Steps. Three 1001 movies in one!

I also had a friend who is a big Ozu fan and insisted that I watch his collection. Ok, I guess I'll check out some Ozu. I had another friend who mentioned having a DVD Alec Guinness collection. The titles The Lavender Hill Mob and The Ladykillers went off in my head. So I asked to borrow them. Why don't I watch more British films? I asked. Well, thank you. I think I will.

How British is it? Something about these British Ealing caper movies that seem...I don't know really British! But what is it, exactly? Is it Alec Guinness? Yes, but that's not quite it.
What about the uniquely British supporting cast like Stanley Holloway or Peter Sellers? Yes, but that's still not quite it.
Is it the distinct dialogue, uniquely British, differentiating it from non-English caper movies such as The Killing or The Asphalt Jungle? Yes, that's close.
But I think it's when they get out in the streets. The neighborhoods, the trolleys, driving on the wrong side of the road, people on bicycles. Just that feeling you get from looking at the screen and your surroundings. Now that's British! 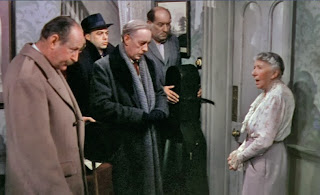 Rating for Britishness from 1-10: A solid 8 for both films.
Posted by 1001: A Film Odyssey is produced, directed and written by Chris, a librarian. at 5:56 AM