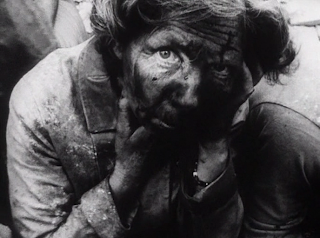 The War Game
This Peter Watkins double feature begins with The War Game, a film about the aftereffects of thermonuclear war in Britain. It is an odd hybrid of a documentary and a fictional movie. The movie is not pretending to be real and continues to tell us that this is what could happen or these were the effects of the aftermath of Dresden or Hiroshima and it could happen here. Yet the style is done as a straight BBC report which includes interviews with those in this fictional community and The War Game gives us black and white images are disturbing enough that you may forget what you are seeing isn't really happening.
Watkins also used a similar approach in Culloden about the ill-fated battle (or slaughter) of Scottish rebels against superior English forces. We are introduced to several involved in the battle as if we are there (in 1746). We learn the motivations of different players in this battle through introductions and extended interviews with some of the players. On the Scottish side, we see how arrogant military leadership directly leads to the death of hundreds. On the side of her majesty, we see how abusive the victorious can be. 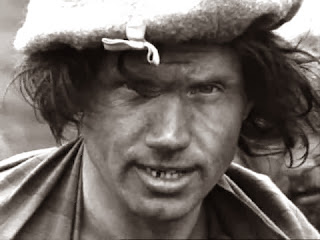 Culloden
But how British is it? British yes, but the harsh themes explored by Watkins in these films are sadly universal.