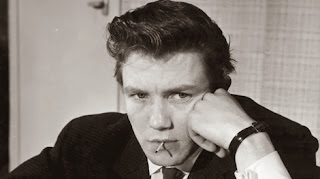 Part of the "new wave" of British flims. (And quite a contrast to the film I just watched, I Know Where I'm Going!) Saturday Night and Sunday Morning features Albert Finney as Arthur, a member of the poor working class who has to deal with the very grown up problems of women, booze and earning a living.

Quick knock on traditional commercial films: Arthur and his girl leave the movie theater after seeing the glossy film Pillow Talk. "That was a bad film" is his girlfriends only comment.

Is this really the same guy? After having recently seen Albert Finney as the old caretaker of Skyfall in the movie of the same name, it's a bit of a shock to see him so damn young here.

I've seen this guy before: It took me awhile to place Norman Rossington, who played Arthur's friend Bert as later playing The Beatles road manager in A Hard Day's Night.

The 1001 list could use come more British movies from the 60's: The Loneliness of the Long Distance Runner, Morgan! A Suitable Case for Treatment and The Knack and How to Get It Come to Mind. Granted, I haven't seen these film in awhile and could change my mind if I watched them again.

How British Is It? Well, I tell ya's. As I light up a fag and thrown down a quid for a pint or three before I go and try to find me a duck to reddog, I figure I'd have to be balmy to not put this one high up on the Brit scale. I'm not crackers, after all.

Posted by 1001: A Film Odyssey is produced, directed and written by Chris, a librarian. at 5:47 AM