I first became aware of Cheech and Chong through their record albums such as Big Bambu during the 70's. Their catholic school recording of Sister Mary Elephant is still one of my favorite routines.

Then they started making movies, man.

And if there was ever a movie that defined late 70's midnight movies, it was probably Cheech and Chong's debut of Up in Smoke. I thought it was pretty funny at the time and was popular enough for the team to make several other movies over the next few years whose titles frankly seem to be lost in a purple haze to me. I do remember these later movies had some funny cameos by the likes of Pee Wee Herman, Timothy Leary and Rip Taylor.

After watching Up in Smoke for the first time in decades, I concede it wasn't without its stoner moments, but it also seemed to get old pretty quickly. However, I must admit that seeing this movie straight seemed pretty much the equivalent of watching a 3D movie without the glasses.

Sorry, it wouldn't be in my 1001 book. But I do urge you to listen to Sister Mary Elephant. 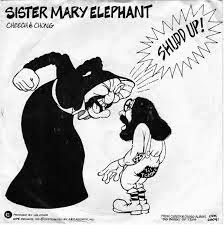 Posted by 1001: A Film Odyssey is produced, directed and written by Chris, a librarian. at 4:27 AM