Boot Hill...Dodge City...Tombstone...The O. K. Corral...Men who live by the gun and drink their whiskey straight! Gunfight at the O. K. Corral is not a Western you watch expecting plot twists and turns. It is pretty predictable plot wise. Sick, drunken Doc Holliday teams up with straight arrow lawman Wyatt Earp to eventually take on the Clanton boys at the big finale at the O. K. Corral. Wyatt and Doc don't get along to well at first, but eventually come to need each other and even call themselves friends. Wyatt has a romantic interest who you know is going to get the short end of the stick when he gets called out to join the fight with his brother. Doc has an ongoing feud with Johnny Ringo, that we know won't be settled until the final showdown. Wyatt has an ongoing dialogue with himself about staying a lawman or starting over. Doc also has a love/hate relationship with a prostitute that doesn't seem destined to end well. But I don't have a problem with the plot, despite the lack of surprises. It is well done. The dialogue is good and there is plenty of action. But really the main to see Gunfight at the O. K. Corral is the teaming of Burt Lancaster and Kirk Douglas.  Burt as Wyatt the contemplative lawman and Kirk as the more emotionally charged Doc really make this one go. They appeared in several films other films together and if there is a male screen team I like better, I can't think of one at the moment.

Interesting credit: Screenplay credit to writer Leon Uris, who I associate more with novels like QBVII and Exodus rather than Westerns.

Interesting credit (take two): Frankie Laine sings the opening theme with the same zest he would sing the opening theme to Blazing Saddles a few years later. He reprises the theme during the middle of the movie with lyrics that supply a lot of exposition for viewers that haven't been paying close attention to the plot during the first half.

And the Elisha Cook Jr. supporting player award goes to....Lee Van Cleef. Desperado Lee comes into town gunning for Doc Holliday in the opening scene. Lee's temperamental character is brutish, drinks his whiskey straight and is quick to pull a gun and not afraid to fight dirty. We see all this in the first few minutes of the film because we know he's going to quickly encounter Doc Holliday and we know it isn't Lee who is going to win. With those beady eyes, Lee rarely played anything but a heavy, but in a Western, somebody's got to take that first bullet (or knife). 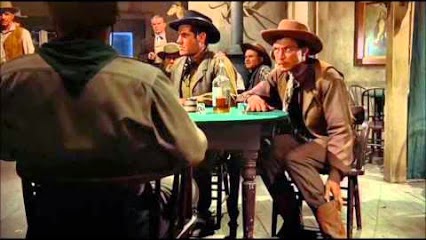 We have future TV stars Martin Milner, DeForrest Kelley and Earl Holliman
We have future easy rider Dennis Hopper
We have future Dobie Gillis dad Frank Faylen
We have the lovely redhead Rhonda Fleming
We have the over-hill-hooker Jo Ann Fleet
We have the steady but miscast John Ireland as the evil Johnny Ringo (I would have rather seen Van Cleef as Ringo.)
We also have another Western stalwart, Jack Elam

But I got to go with Lee on this one.

Posted by 1001: A Film Odyssey is produced, directed and written by Chris, a librarian. at 7:27 PM