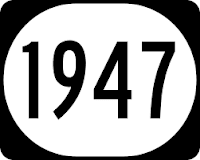 After fifteen tough choices for 1946, the 1001 book only has four movies from 1947! I seem to like actual Best Picture winner Gentleman's Agreement more than many, but it didn't make the 1001 list.

And the nominees on the entries from every edition of 1001 Movie You Must See Before You Die are...

Gilda
Monsieur Verdoux
Out of the Past
The Ghost and Mrs. Muir
Odd Man Out 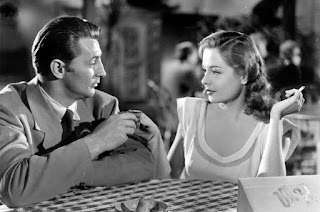 The tough guy in a trench coat and a snap brimmed hat played by Robert Mitchum is trying to go straight. He's got a new life and a new girl, but his past comes back to haunt him. Other classic noir elements from Out of the Past include: the beautiful but deadly dame played by Jane Greer, the crime boss played by Kirk Douglas who keeps sucking Mitchum back into his old life, the dark setting and tone from director Jacques Tourneur, and of course that snappy dialogue from screenwriter Daniel Mainwairing. We also get a complicated plot that is more than a bit confusing at times, but as long as you can kind of keep up with who is double crossing who and what the motivations of the characters are, you'll be alright. This seems like the best choice from the limited number of 1001 choices presented for Best Picture for 1947. 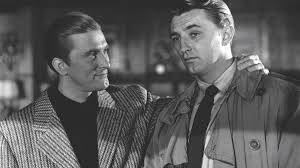 And the Award for Unique and Artistic Picture of 1947 is...Monsieur Verdoux 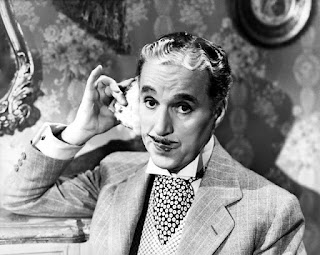 It’s interesting to see Chaplin in a guise other that of the little tramp. In Monsieur Verdoux, Charlie plays a modern day Bluebeard who marries or takes advantage of middle-aged women for their money and disposes of them afterwards. It is pretty funny despite the dark subject matter, especially some of the scenes with Chaplin and Martha Raye (a later generation came to know her as: Martha Raye: denture wearer, but she was a talented comedienne in back in the day).

All these later Chaplin films tended to end with a bit of moralizing. This one might be best summed up with Verdoux calling himself an amateur murderer compared to the systematic murders of states about to go into a bloody world war. Kill a few they give you the guillotine, kill a lot they make you a king.
It wouldn’t be my first film recommendation for those uninitiated with Chaplin, but I think it is deserving of its place in the 1001 movie book and about the only film of these four that I can see as the winner of Unique and Artistic Production for this year. 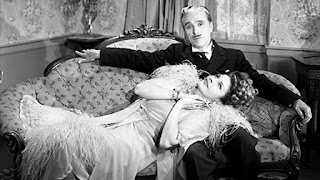 Monsieur Verdoux
Posted by 1001: A Film Odyssey is produced, directed and written by Chris, a librarian. at 4:00 AM