Twenty! 1001 movie to choose from for this year. Tough choices

And the nominees on the entries from every edition of 1001 Movie You Must See Before You Die are...
Artists and Models
Guys and Dolls
Peter Panchali
Bad Day at Black Rock
The Mad Masters
Hill 24 Doesn't Answer
The Ladykillers
Marty
Ordet
Bob the Gambler
Kiss Me Deadly
The Man From Laramie
Rebel Without a Cause
The Phenix City Story
Smiles of a Summer Night
Night and Fog
The Night of the Hunter
Lola Montes
The Man with the Golden Arm
Oklahoma! 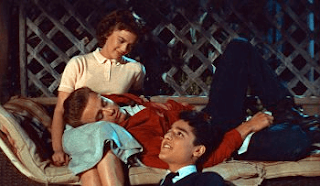 And the Award for Unique and Artistic Picture of 1955 is...Bad Day at Black Rock 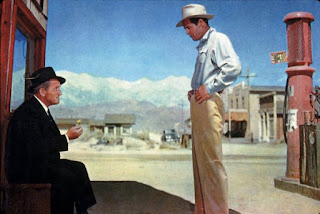 Bad Day at Black Rock is a very difficult film to pigeonhole. It looks like a Western. The few Black Rock residents we see are mostly dressed like cowboys. The chief power in the town is a man called Reno Smith, a Western name if I ever heard one. But its 1945, Not 1885! The town seems so slight that it reminded me of the fake town the townspeople built in Blazing Saddles to fool Slim Pickens. And Macready (played by Spencer Tracy) is wearing a suit, sort of like he jumped out of an episode of Mad Men. It also has a film noir flavor, with the mysterious town harboring a great secret But since it’s in glaring Technicolor it can’t be film noir! It’s also a talky film with a lot of action or is it an action film with a lot talk? The cast is top notch. Tracy as the one-armed hero, Robert Ryan and Ernest Borgnine as the heavies determined to do what is necessary to take care of Macready. Also look for character actor extraordinaire Walter Brennan as the good hearted doctor/mortician. Another example of the ying and yang of this movie. It can also be viewed as an existential theatrical piece (as someone else pointed out, it's sort of like Sartre’s No Exit). I mean twelve people live in this town and there’s only one girl! Overall, I like the fact that I can’t easily place this movie. It’s bugging me. But it’s well acted and well done. It's existential nature makes me put in the artistic category, but it could easily fit into the other Best Picture category as well.

Bad Day at Black Rock
Posted by 1001: A Film Odyssey is produced, directed and written by Chris, a librarian. at 4:30 AM