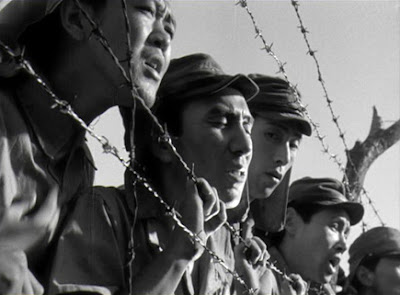 Day twenty-five, from the Constitutional Monarchy of Japan
The Burmese Harp (1956)

You know, Kurt Vonnegut said making an anti-war film was like making an anti-glacier film. I guess he's right. I guess you'll never stop it. But you gotta fight for peace. Hey, that's funny. Fight for peace. That expression seems to be a bit of an oxymoron. Too many blogs in a row. Beautiful film, though. See it. It may inspire you to join a monastery, learn to play Home on the Range on a harp or at least buy a parrot. Love the music in this film. Did I mention this was a beautiful film? I think I did. Too many films in a row, though. At least I'm seeing good films. How do actual film critics do it? I mean how are they able to watch all those romantic comedies in succession? Feel bad for them. Final words on Burmese Harp: Beautiful film. Did I say that already?
Posted by 1001: A Film Odyssey is produced, directed and written by Chris, a librarian. at 9:27 AM