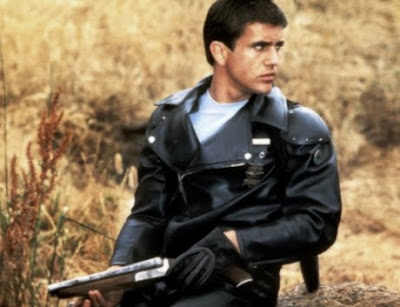 Day fourteen, from the Commonwealth of Australia
Mad Max (1979)

It may seem strange that a moviegoer from my generation has never seen any of the Mad Max/Road Warrior Movies (Though I did hear Tina Turner’s song Beyond Thunderdome at least a thousand times back when it was in the top 40). Actually, when I watched the extras to the DVD I rented, I realized that I had seen part of a version of Mad Max. It was an English dub on cable many years ago. You got that? A movie that was already in English used a dub with American voice actors! I remember the voices in that version seemed so strange that I was only able to watch a portion of it. Glad I saved a complete viewing for the real "undubbed" deal.
Posted by 1001: A Film Odyssey is produced, directed and written by Chris, a librarian. at 11:55 AM