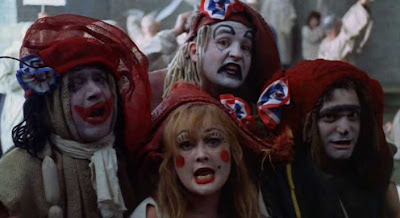 My own personal March movie madness. My goal was to make 31 posts in 31 days about 31 movies. This is post 31 and may be the madess movie of them all.

Day thirty-one, from the British Empire.
My prefered title for this film is THE PERSECUTION AND ASSASSINATION OF JEAN-PAUL MARAT AS PERFORMED BY THE INMATES OF THE ASYLUM AT CHARENTON UNDER THE DIRECTION OF THE MARQUIS DE SADE, but it is more often known as Marat Sade (1967).

There are certain movies you go into with certain preconceptions. The first one I have about this film with the long title above is that it was (I don’t know if it still is) in the Guinness Book of World Record for longest title for a feature film. That was the first time I ever heard of it.

I knew it also received good reviews over the years, so I taped in on a VHS cassette to watch later. That was 1988. 1988! And I still haven’t seen it! I tried to watch it once and couldn’t get into it. But I’ve been thinking that if ever I was going to watch it, while I was doing this blog was the time to do it.

Since I suppose you would label this as an avant-garde film/play, I keep thinking of the quote by Beatle George Harrison, “Avant-Garde is French for Bullshit.” We’ll see. I hope I don’t end up wishing I were watching Last Year at Marienbad instead.

The 23-year-old VHS tape didn’t have the best sound quality and it was strange seeing ads for the new 1988 Toyota Tercel, Premeire magazine promoting the new movies The Untouchables and Good Morning, Vietnam, Writer Richard Reeves asking you to subscribe to American Heritage and Atlanta Hawk Dominique Wilkins telling you to take all your back problems to the Arrowhead Chiropractic Clinic, but I trudged on.

The film itself featured The Royal Shakespeare Company. When I think of The RSC, I visualize the greatest actors in the world. Whether I’m right or not, that’s my preconception. Included in the cast is Patrick Magee as the Marquis de Sade (who I last saw as the abused writer in A Clockwork Orange) and a young Glenda Jackson (future Oscar winner and future member of Parliament) as Marat’s murderer Charlotte Corday.

The semi-truthful plot of the institutionalized Marquis de Sade writing and directing plays in the lunatic asylum of Charendon is pretty bizarre and pretty original.

Of course, when I think of the Marquis de Sade, the first thing that I think of is Sadism, defined as a sexual perversion in which gratification is obtained by the infliction of physical and mental pain of others. (Thank you, People’s Almanac)

Now when I think of Charlotte Corday murdering Jean-Paul Marat, I don’t think of the French Revolution or The Reign of Terror or Robespierre as much as I think of the Painting by Jacques-Louis David depicting an idealized martyred Marat dead in his bathtub in The Death of Marat as I saw in Simon Schama’s The Power of Art. (Schama thought David was a great artist and an awful human being.)

Now on director Peter Brook. When I think of Brook, I think of Author Ron Rosenbaum’s commentary on the viewing of Brook’s staging of A Midsummer Night’s Dream in the 60’s. “I count it as one of the greatest blessings of my life to have been there for that moment. I’d never experienced anything of such radiant clarity. To say it was ‘electrifying’ does not capture the effect.; it was more like being struck by lightning. I felt ‘transported’ in the literal sense of being physically as well as metaphysically lifted from the muddy gesture of the earth to some higher realm. It was a lifelong love potion. It was a lens through which I could not help see all Shakespeare, indeed all literary art, ever after. It was: ‘Oh, that’s what the fuss is about.” (I’d say that was a thumbs up.)

The movie itself? Here is an exerpt from the original review from New York Times Critic Bosley Crowther: "We are ushered in with the inmates in their hideously rought and shapeless garb, with their fearfully gray mishapen faces. We bump against them. They bump against us. By means of a hand-held camera, Mr. Brook moves us through the white-walled room with its rude wooden floor-boards and benches. He makes us feel that we, took are captured inside a teeming cage."

I had a hard time getting into it at first, but as I stuck with it, there appeared to be a method to this madness. And the ending? I’m not likely to forget the ending anytime soon. If you had asked me half way through this viewing if I would ever watch Marat Sade again, I would have said, ‘unlikely.’ If you asked me the same question after it was over, I would say, ‘I hope so, but I need a copy with better sound and preferably subtitles.’

Q: Would you like to act in a stage version of Marat Sade? A: Absolutely! Sign me up!
Posted by 1001: A Film Odyssey is produced, directed and written by Chris, a librarian. at 10:28 AM