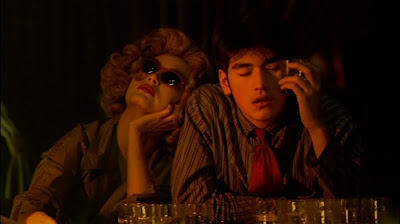 Day twenty-seven, from Hong Kong, while still under the control of the British Empire
Chungking Express (Expiration date: 1994)

You know...sometimes with an art film you might watch it once, you know, and ask "What was that about?" or say "I didn't get it." Then, you know watch it again and you're like, "Hey, I get it! That was a pretty cool film." That was true for me of Chungking Express. The two stories in this film didn't seem to have anything to do with each other, yet they did, but that was the point. Wasn't it? Or was it? I think I've confused myself. I'll bet Godard never used any Mamas and the Papas song in his movies, eh? Not that that's important. Anyway, would I see more Wong Kar Wai films? Why, yes I would.
Posted by 1001: A Film Odyssey is produced, directed and written by Chris, a librarian. at 9:40 AM