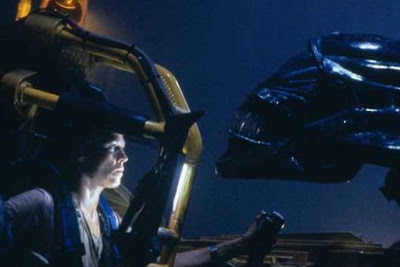 SIGOURNEY WEAVER: Good evening. I’m Sigourney Weaver and this week’s battle on James Cameron Movie Elimination Showdown features to my left the Alien or should I say one of the aliens from the movie Aliens and to my right is one of the Na’Vi, Na-vee, uh, I’ll just call you Avatar to simplify things if you don’t mind. Now Mr. Alien. And I admit I didn’t know you could even talk. But go ahead and state your case.

ALIEN: Well nobody ever gave me much of a chance to talk in the movies. Always trying to kill me and the like.

SIGOURNEY WEAVER: Well, you were trying to kill me, too!

ALIEN: I wasn't trying to kill you really. You were just so distracting in your underwear, can I really be held accountable for my actions?

AVATAR: I thought you were supposed to be a female?

SIGOURNEY WEAVER: Anyway. State your case. Why is Aliens better than Avatar?

ALIEN: Well, we made…you and I and Cameron and a whole lot of people made and defined what a modern day action picture should be. Being a sequel actually helped us. We had the bonus of a setup before the action starts and never lets up.

AVATAR: Yes, but you do that at the expense of characters. Pretty one dimensional in my opinion.

ALIEN: Look who’s talking, Mr. "We stole our plot idea from Ferngully." And what about all that corny dialogue like (speaking formally) “You are now a son of the Omaticaya, Jakescully. You are the colors of the wind and rainbow and one with nature. a network of energy that flows through all living things, your spirit goes with Eywa.” Come on! It's Dances With Wolves on acid!

AVATAR: You’re one to talk. Why does Bill Paxton have to talk like an 80’s surfer dude in your movie? Isn’t it supposed to be set in the future?

SIGOURNEY WEAVER: OK, Avatar. Why are you better?

AVATAR: Well. Only the most amazing special effects ever. Only the biggest box office hit of all time. It’s like a beautiful dream…only it’s real.

ALIEN: With stock characters you stole from Aliens. The Latino chick that kicks ass. The weasly little dweeb who is only after a buck. Recycled characterizations, blue boy!

AVATAR: Cameron refined these characters in Avatar…took away the flaws in their characterizations and made them more interesting, like the way we updated your prehistoric special effects.

SIGOURNEY WEAVER: Well, you got to admit when it comes to characterization, we are dealing with James Cameron and not Paddy Chayevsky.

(Alien and Avatar both laugh)

AVATAR: And we have, of course, the lovely Ms. Weaver in our picture as well. (Turning to Sigourney) If I hadn’t already chosen a mate, I would definitely consider you even if you are one of the skypeople.

SIGOURNEY WEAVER: Why you’re a flatterer too, but alas, I’m afraid its too late. The votes are in and the winner is….Aliens.

(Avatar raises his hands and curses in Na’Vi)

(SIGOURNEY WEAVER pulls a lever and a trap door opens and the Avatar disappears.)


SIGOURNEY WEAVER: Turning to the Alien. I always wanted to say that.

ALIEN: I thought your line was “Get away from her, you bitch.”

SIGOURNEY WEAVER: I’m the host of this show and I’ll use whichever damn James Cameron catchphrase I want! Do you understand?

(The Alien spreads his hands in mock surrender)

SIGOURNEY WEAVER: And speaking of The Terminator. Next week on James Cameron Movie Elimination Showdown, we have the Terminator T-800 facing off against Rose from Titanic. Ought to be quite a match up.

Good night for now and until next week…we’ll be back.

(The Alien and Sigourney Weaver wave goodbye to the audience as the screen fades to black.) 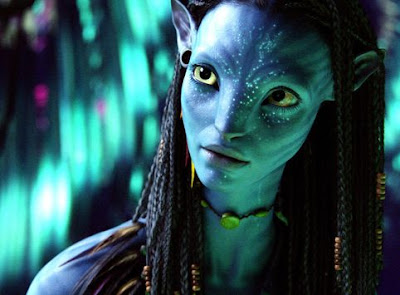 Posted by 1001: A Film Odyssey is produced, directed and written by Chris, a librarian. at 1:08 PM