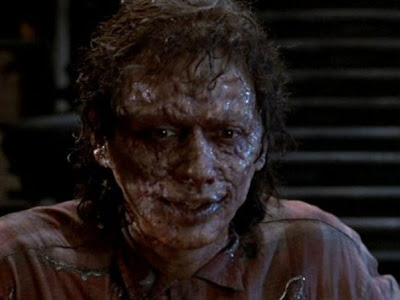 The way I remember the original The Fly that was released in 1958, a doctor is conducting transportation experiments and transports himself unwittingly with a fly and ends up with having a human body and a fly head!

The last scene has Vincent Price finding the other half of the fly body stuck on a spiderweb with a small human head squeaking “Help me, Help me!” before being put out of his misery by a stone. I remember my brother used to scare me by repeating the “Help me, Help me,” line, which was pretty chilling (Though some find this scene in the film pretty campy)

But the 1001 Movies You Must See Before You Die book prefers David Cronenberg’s 1986 resurrection of The Fly, (honestly, so do I) where a simple but seemingly obvious improvement was made from the first film: Wouldn’t it be more logical and interesting if the fly and the doctor were somehow fused? It really didn’t make sense for the computer to say human head on fly and fly head on human. In the remake we get to see Dr. Brundle turn into a sort of human housefly where his physical degeneration is probably the highlight of the film. And the last scene is alternately gross and kinda makes ya weepy at the same time.

One unnecessary note on the 1958 version of The Fly: It was not only popular enough to spawn two sequels and also led to an infamous copycat film called The Wasp Woman, which is a movie about a woman who uses wasplike aging cream or something and turns into a Wasp creature. I remember seeing this campy film on television during the 70’s and I admit,(and this is a sad confession) that I did find it a little scary at the time. 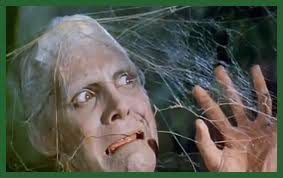 From the original The Fly, I can still here my brother saying "Help Me! Help Me!" in mocking tones. 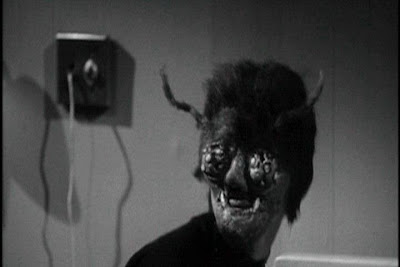 Laugh if you will. But I still say The Wasp Woman is damn scary!