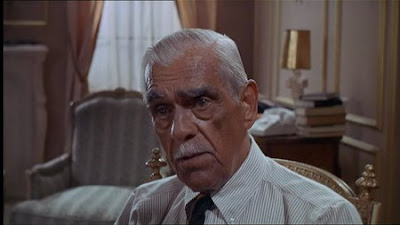 Targets-Targets is really two movies in one. The story one thread includes a lone gunman whose shooting rampage ends at a drive-in theater. The story two thread features Boris Karloff (essentially playing himself as an aging horror star) reluctantly promoting his latest movie. This was Peter Bogdanavich’s first film and was certainly one of the best things he ever did. A real favorite of mine.

Part of the film's appeal is that it is the movie swan song of Boris Karloff. He was best known as the Frankenstein monster in Frankenstein and the Bride of Frankenstein. He also had many memorable roles in other horror films such as Tower of London and The Body Snatcher. He also popped up in supporting roles in such diverse films as Scarface, The Lost Patrol or even as an American Indian in Cecil B. DeMilles’ Unconquered. And who could forget his unforgettable voice in the animatated The Grinch That Stole Christmas?

Targets seemed such an appropriate final film for Karloff, and he is most perfect playing a man who considered himself a boogeyman antique compared to the horrors that plague us in the all too real world.

Would you recommend Targets? Certainly.

Edward Scissorhands-The Tim Burton/Johnny Depp film Edward Scissorhands is the final screen appearance of another horror legend, Vincent Price. His very small role is as the doctor who creates Edward, but dies before he gets the opportunity to finish his hands. Price’s look before he dies in the film is something to see. It is at once menacing and at the same time very tragic.

Price through the years showed up everywhere in movies and television. He had many non-horror parts that were notable (such as in Laura), but may be best know for his series of American International films based on Poe stories such as: The Masque of the Red Death, The Conqueror Worm and The Pit and the Pendulum. Another personal favorite of mine with Price is Theater of Blood, in which Vincent plays a hammy actor who takes extreme measures of revenge of his critics.

One thing about Price, he never seemed to find anything that he wouldn’t do. His title role as Dr. Goldfoot and the Bikini Machine and its sequel Dr. Goldfoot and the Girl Bombs were typical of his never met a script I didn’t like policy. He was also a regular in his later years on Hollywood Squares and let’s not forget his role as the villain Egg Head on the Batman television series.

Like Karloff, Price may be known to some fans chiefly for his voice-over narration. In this case, his narration of the Michael Jackson Thriller video.

Would you recommend Edward Scissorhands? Yes. Did I mention it was the last screen appearance of Vincent Price? 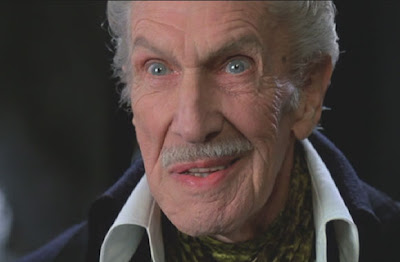 Posted by 1001: A Film Odyssey is produced, directed and written by Chris, a librarian. at 3:08 PM