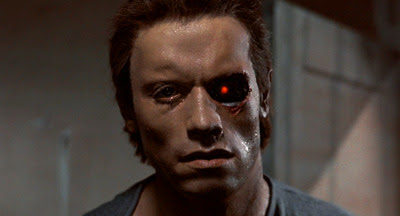 That Terminator is out there. He can not be bargained with. He can’t be reasoned with. It doesn’t feel pity or remorse or fear…and it absolutely will not stop EVER…until you are dead!

I remember the first time I saw The Terminator. It was at the Lyceum Theater at Georgia State University. The college crowd that I was among was silent throught most of the movie. A few gasps were audible here and there, but the crowd was totally into it and it was damn scary...

At least that’s the way I remember it.

Today, it’s still an intense viewing experience. The plot of this relentless futuristic cyborg going back in time for the sole purpose of killing the mother of the man who will save humanity makes might make you feel silly if you look at the plot too closely. As the 1001 book points out, this film could have easily been a candidate for an especially cheesy episode of Mystery Science Theater, yet it never does. I’m buying into the Terminator thing and I’m still buying into The Terminator thing. I guess we have James Cameron to thank for that. And Arnold. And one other name-Brad Fiedel and his sythestisized heart pounding music. Thanks, Brad.

Favorite line: Not one of the more famous ones, but the scene where the Termintor is walking down the hall of his lodgings with his shotgun, a black guy backs away from him and says, “DAMN!” Don’t ask me why I like this so much, but I know if I saw a Terminator coming, I’d probably say the same thing.

Thank God he went back to 1984 and not 2012: I gripe about this a lot. How cell phones and the ease of communication and reaching people might be good for our lives, but bad for drama. Think of the scenes in The Terminator that involve phone books, answering machines and phone booths. With that music thumping in the background it makes the tension almost unbearable. Now, picture the Terminator going back to 2012. He kills some biker, takes his clothes and laptop and procedes to find Sarah Conner on Google. Uh, not exciting.

I thought the one thing The Terminator didin’t need was a sequel, but we got one in 1991, Terminator 2: Judgment Day.

I stand corrected about us needing this. The first hour of T2 never seems to let up. With the first Terminator movie to build on, T2 has a new, more advanced Terminator sent from the future to kill the young John Conner. This film has the effective twist of the old Terminator model (Arnold) being reprogrammed to protect John Conner from the new one one.

The second half drags a bit with a few too many Sarah Conner voice over narrations, “The Terminator was the like the father John had never had and would never have…"or something like that. And the product placement was a bit much at times. (How many Pepsi machines are in this movie?) But these are minor quibbles. I like this one too. Both would be in my book.

But one thing The Terminator series didn’t need was a sequel to the sequel and this time I think I was right. Posted by 1001: A Film Odyssey is produced, directed and written by Chris, a librarian. at 3:22 PM