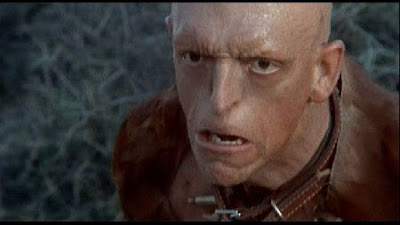 The Hills Have Eyes

Wes Craven’s low-budget story of a white bread family traveling out West that gets terrorized by a family of cannibals is not for all tastes, but it certainly is not without its charms (for lack of a better word).

It’s not as graphic as The Evil Dead (few films are) but it does have its share of gruesomeness, so those that aren’t satisfied until a certain level of gore is obtained should probably get their fill.

The CB factor: Ah, the days before cell phones-when drama could unfold without the crutch of texting. Yes, this family in need used a CB radio in its time of crisis. I could almost hear the C. W. McCall song Convoy playing in the background. The cannibal family also had to make use of walkie talkies! Walkie Talkies! How cool is that?

But overall, would I recommend The Hills Have Eyes? Would it be in my book?

I’m not so sure, though any movie whose cast includes the unique look of Michael Berryman (above) certainly has at least that going for it.

Posted by 1001: A Film Odyssey is produced, directed and written by Chris, a librarian. at 1:03 PM