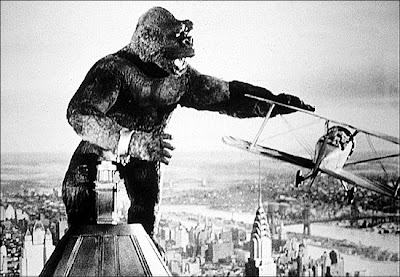 There is only one King Kong.

I know the special effects reminds me a lot of the special effects from some of the Rankin Bass Christmas specials (King Kong vs. the Abominable Snow monster?) but I still find them effective. And there are some lapses in logic. I mean there are living dinosaurs on the island of King Kong! Living prehistoric dinosaurs! Yes, Kong is amazing, but why doesn’t anyone seem interested in getting hold of some of those dinosaurs in addition to Kong?

And the character of Carl Denham, the movie director, whose team brings Kong back to the states. It is his greed in trying to capture Kong that leads to the death of most of his ship’s crew, many natives on Kong’s Island as well as many in New York after Kong escapes there. Why doesn’t anyone want to punish this guy? He even gets the films famous last line, “Twas Beauty killed the beast.” The last line of the movie should have been, “Karl Denhman you’re under arrest!”

But these are small quibbles. It’s still great to see Kong fighting the dinosaurs, attacking a trolley or just being obsessed with that beautiful angel, Fay Wray.
And is there a more iconic scene in movies than Kong battling the airplanes from the top of the Empire State Building?

Certainly any movie fan should visit Kong at least once in their lifetime.

Posted by 1001: A Film Odyssey is produced, directed and written by Chris, a librarian. at 3:00 PM