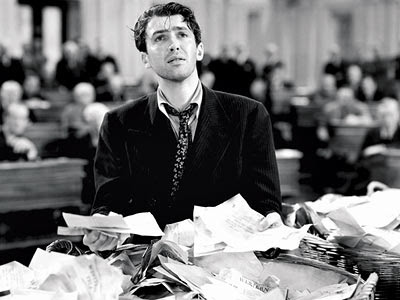 Maybe the corniest (And that's not necessarily a bad thing)of all the Capracorn movies that Frank Capra directed in the 30's and 40's. I don't think Jimmy Stewart has ever been better cast as scout leader Jefferson Smith, who gets appointed to the U. S. Senate as someone who wants to do the right thing, which is in direct contrast to what the political power makers that put him there want. And Jefferson's filibuster is of course one of the most famous moments in American movies.

This is the second time I've seen this film and the first time in about twenty years. Capra's It's a Wonderful Life, I've seen at least twenty times. Viewing Mr. Smith again, I noticed more than a few actors and actresses that appeared in both films. Thomas Mitchell as Diz in this film and Uncle Billy in Wonderful Life is the most prominent. But how about Beulah Bondi, who plays Stewart's mother in both films? How about grumpy character actor Charles Lane, who appeared in both films, as well as seemingly hundreds of others up until his death at age 102? How about H. B. Warner, who went from playing Jesus in the silent King of Kings to the Senate Majority leader in Mr. Smith to Mr. Gower,the troubled druggist in Wonderful Life? You also had real bit players like Dick Elliot who was in both films ("Youth is wasted on the young!" is his most memorable line from Wonderful Life. He later went on to play Mayor Pike in The Andy Griffith Show which I include for no reason in particular.

There are others. I know there are others in both movies...but I'll leave that search to Capra film scholars. I'm a busy man, afterall. I've got a life, you know!