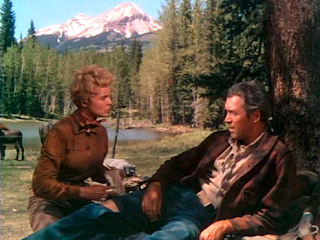 
For those more familiar with the Jimmy Stewart of Frank Capra comedies or Alfred Hitchcock thrillers, it may be a surprise to see him playing a much tougher character in Westerns. In fact, he did a lot of Westerns. The two Stewart Westerns that come to my mind first are How the West Was Won and The Man Who Shot Liberty Valance. But Stewart also made several Westerns with director Anthony Mann, none of which I've seen before going through this list. Obviously, they are well thought of since three of them are on the 1001 list.

In The Naked Spur, Stewart plays bounty hunter Howard Kemp who is set on bringing in outlaw Robert Ryan for the reward. He has to contend with Ryan's girl (Janet Leigh) and is assisted by his crusty prospector sidekick played by Millard Mitchell. He also has to contend with an dishonorably discharged Union soldier played by Ralph Meeker. This small cast are almost the only people in the entire film with the exception of a few Indian extras. But they don't matter anyway, do they?

The Indians don't matter anyway, do they? The gang has a run in with the Indians that is just about to be handled peacefully until the impetuousness of the Ralph Meeker character leads to a bloody shootout where...well, it's at least bloody on the side of the Indians as most of them get gunned down. Damn Yankee soldier.

The great sidekick that never fulfilled his potential: Millard Mitchell plays Stewart's bounty hunting ally here. He also played Stewart's loyal deputy in Winchester '73. I was curious what happened to Millard, as good movie character actors don't grown on trees. Answer: He died of lung cancer at age fifty in 1953, the same year The Naked Spur was released. So let this be a lesson to you kids: Don't smoke! It could stand in the way of you becoming the next Walter Brennan. 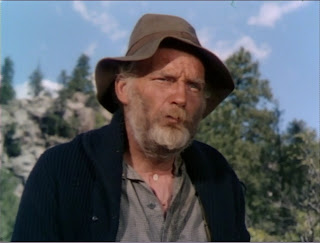 Posted by 1001: A Film Odyssey is produced, directed and written by Chris, a librarian. at 4:52 PM