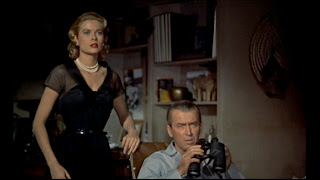 
During the 1980's, four of the five Alfred Hitchcock movies that were re-released to theaters starred our man Jimmy Stewart (Rear Window, Vertigo, The Man Who Knew Too Much, Rope). In Rear Window, Stewart plays Jeff Jeffries, a photographer with a broken leg and an impossibly beautiful society girlfriend (Grace Kelly) who likes to bitch at him about his lifestyle and talk about eating at Twenty-One. Jeffries has little to do but sit around his apartment and spy on his neighbors, who seem to, luckily for the movie audience, not believe in curtains. We, the viewer, get to put ourselves in the postion of Jeffries, also the viewer, and live vicariously through him. Of course, he witnesses foul play from one of these neighbors and putting together the puzzle pieces as to what is going on is most of the fun in one of my favorite Hitchcock movies. 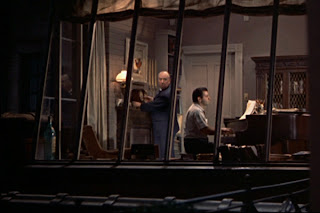 The stuggling (aren't they all) composer with a drinking problem (don't they all) who at least gets the honor of sharing Alfred Hitchcock's cameo. 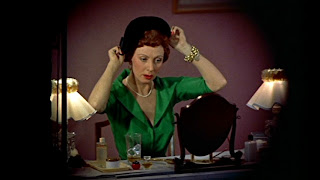 The sad Ms. Lonelyhearts. Looking for love. Looking for the right man. Who knows, if this had been a Douglas Sirk movie, she might have been the main character. Of course, by Hollywood standards the part of Ms. Lonelyhearts would have then been played by Grace Kelly, who they would have been given big glasses for her to wear to attempt to make her look "plain," but...I digress. 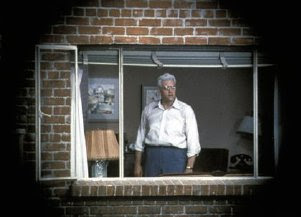 The mysterious and sinister Thorwald, played by Raymond Burr, long before he started doing Independent Insurance Agents commercials in the 70's. 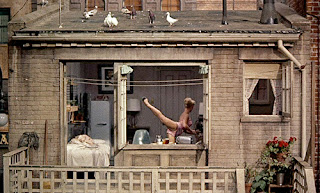 And last, but definitely not least, Ms. Torso, the ultimate fantasy girl, even for someone who has Grace Kelly as a girlfriend.
Posted by 1001: A Film Odyssey is produced, directed and written by Chris, a librarian. at 10:31 AM