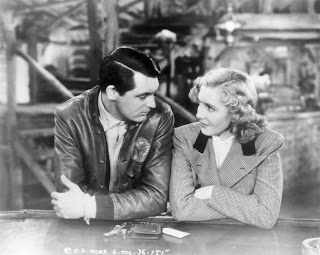 Only Angels Have Wings

Action/adventure from director Howard Hawks about South of the boarder airmail carriers who seem to often risk life and limb to the deliver the mail (or nitroglycerin or whaterver). Only Angels Have Wings more than likely invented a lot of the clichés that became standard for the action genre.

Jean Arthur (as Bonnie Lee and that sexy, raspy voice of hers) plays the leading lady who quickly falls for the charms of the rugged boss of the carriers, Geoff Carter (Cary Grant).

As many of the Hollywood films of the era, this has a lot of character actors who were known (at least to me) for other things. Including: Victor Kilian (Sparks) many years later became the Fernwood flasher on Mary Hartman, Mary Hartman, Noah Beery Jr.(Joe Souther), later became James Garner’s sidekick on The Rockford Files. Sig Rugmann (Dutchy), had memorable supporting roles in Marx Brothers movies and Ninotchka. Richard Barthelmess (MacPherson), had earlier played leading roles in D. W. Griffith silent films, and Rita Hayworth (as Judy) later went on to become Rita Hayworth!

But did any supporting actor ever have a better supporting actor year than Thomas Mitchell did in 1939? He has a fine role here as the visually impaired Kid Dabbs, who worships the ground (and the air?) that Geoff walks (flies?) on. That same year he played Gerald O'Hara in Gone With the Wind, the cynical Washington insider in Mr. Smith Goes to Washington and took home the best supporting Actor Oscar for his portrayal of the drunken doctor in Stagecoach. It's too bad Mitchell couldn't have played the Tin Man or the Scarecrow in The Wizard of Oz, too!. Oh, well. 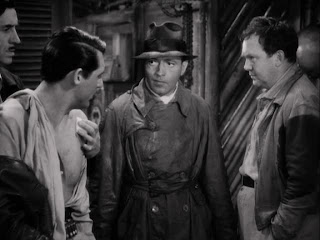 Posted by 1001: A Film Odyssey is produced, directed and written by Chris, a librarian. at 4:59 PM