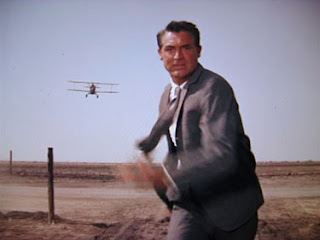 “You listen to me. I’m an advertising man, not a red herring. I’ve got a job, a secretary, a mother, two ex-wives, and several bartenders dependent on me-and I don’t intend not to disappoint them by getting myself killed!”

It’s hard to imagine anyone but Grant in the role of Roger Thornhill, so maybe critic Richard Thompson is right. Grant might just be the most important star in film history.

Oscar note: The noteworthy screenplay by Ernest Lehman went up against Ingmar Bergman for Wild Strawberries and Francois Truffaut for The 400 Blows for the 1959 Academy Award and they all lost out to the screenplay for... Pillow Talk. Pillow Talk? The Rock Hudson/Doris Day movie? Really? I demand a recount.
Posted by 1001: A Film Odyssey is produced, directed and written by Chris, a librarian. at 2:55 PM